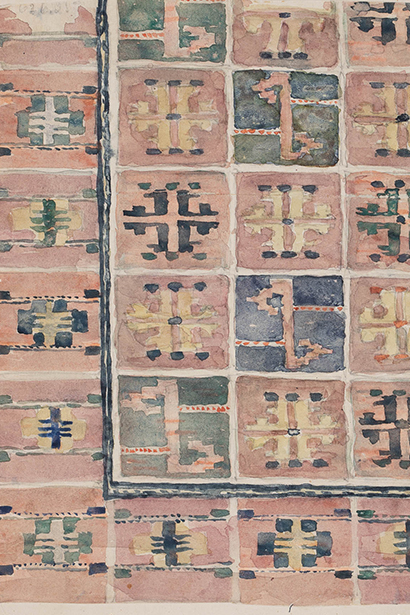 The Ulriksdal rug in the famous living room, designed in 1924 by Märta Måås-Fjetterström.

The wedding gift to Crown Prince Gustaf (VI) Adolf and Lady Louise Mountbatten from the people of Stockholm was a newly furnished living room at Ulriksdal Palace. Together with artisans such as furniture designer Carl Malmsten, Märta Måås-Fjetterström was among those who contributed to the interior.

Click on the sketch to see the image of the rug.
Photo sketch: Anette Nilsson
Photo rug: Sanna Argus Tirén/Royalpalaces.se

Märta Måås-Fjetterström invariably painted the sketches for her rugs and weavings in watercolour. Thanks to her sketches, the craftsmanship and the cultural heritage live on. Read more about the treasury of patterns.